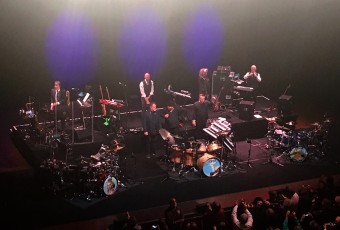 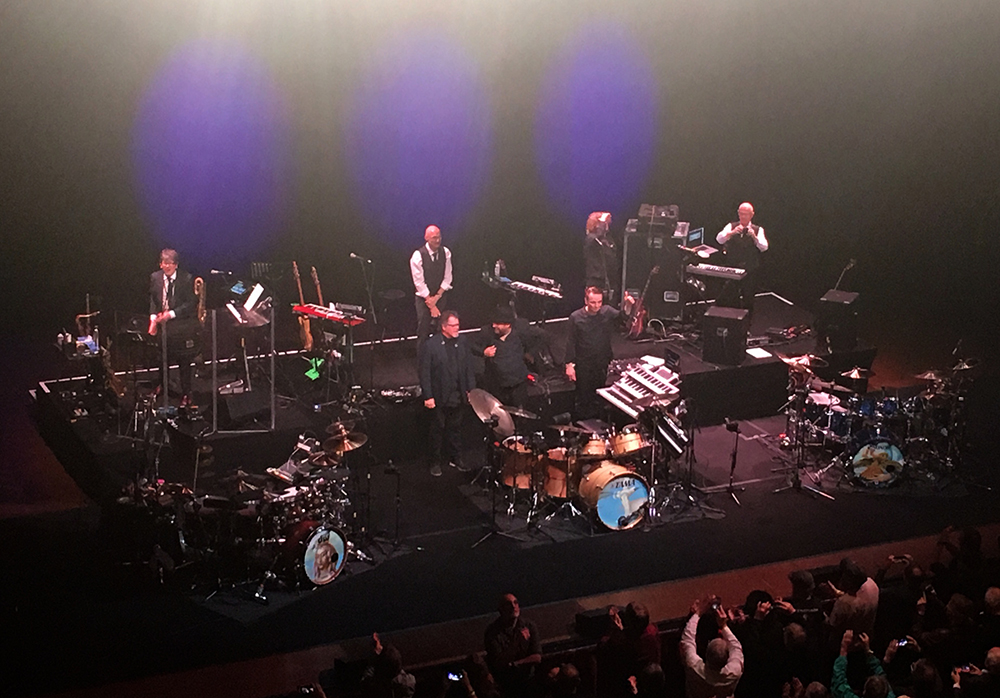 BOSTON – When one sees King Crimson in concert, it seems that describing it as simply “going to see a show” just isn’t good enough. It’s more like “a moving, emotional, musical experience” and on this warm September night at the elegant Wang Center in Boston, it was certainly a concert experience to behold.

This legendary progressive band, led by its ever-calculating founder and guitarist, Robert Fripp, not only creates a wide-ranging musical tapestry, but a uniquely visual one as well, and I certainly don’t mean by way of physical stage antics by its band members.

Unlike any concert you’ll experience – and as opposed to the traditional drum riser set up behind the rest of the band – this band places not one, but three full drum kits up front, with the riser set behind to support two guitarists (Fripp and guitarist/vocalist Jakko Jakszyk), bassist Tony Levin, and the one-man woodwind section of Mel Collins. Truly a unique and exciting visual to behold, while also creating a sonic wall of sound that’s second to none.

The musicianship displayed on this night was diverse and free-form, yet uncanny in its synchronicity and continuity… the range of styles, emotions, and tone were dizzying. For example, one song will evoke a quiet, peaceful melody accompanied by a delicate flute or tasteful saxophone solo, and then the next song will pummel you with powerful drum rhythms that are shot out of a cannon! With the dynamic of each song being so different back-to-back, it would almost create an uneasy edginess in the atmosphere… a seemingly perfect Crimson scenario.

The dueling guitar work of Fripp and Jakko Jakszyk is well-rounded, with Fripp’s piercing riffs and howling leads, balanced off by the tame (in comparison), mostly rhythm guitar work of vocalist Jakko, who brilliantly plays off his partner’s direction with ease, while effortlessly performing intense, purposeful vocals all the while.

The versatile bassist extraordinaire, Tony Levin, is a percussive genius, who eloquently (somehow) ties it all together with his rich and wide-ranging, low-end notes and tones. The aforementioned one-man woodwind section of Mel Collins creates the perfect accents to all the energy and mayhem – whether it be a beautiful flute solo or a powerful sax improvisation, he knows precisely where to add his color to the mix.

The set list was wide-ranging and creative, touching upon the band’s entire 50 years in music.